The issues you need to decide during a divorce are the most difficult you will ever face. It's understandable that it can cause conflict and uncertainty. If division of marital property, child custody arrangements and the possibility of spousal support are up in the air or in conflict, contact the law office of Cranston, Rhode Island contested divorce lawyer Steven A. Robinson.

For over 30 years, Mr. Robinson has been representing clients in negotiations and in litigation in family court. No matter how complex your Rhode Island divorce case, Mr. Robinson can help you arrive at a resolution of the issues. If you think the divorce will be amiable you can also look into divorce mediation.

This is another area of law that Mr. Robinson has brought forward on appeal.

For a strong legal advocate in your contested divorce case, call Robinson & Robinson, Attorneys at Law, at 401.785.3400 or contact us online to schedule a free initial consultation. 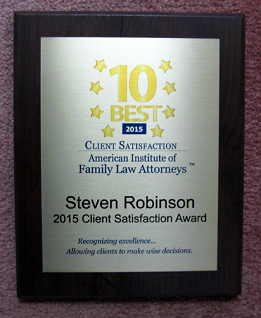